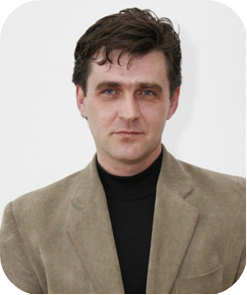 In 1995 graduated from the Novgorod State Agricultural Academy, received a degree from a scientist agronomist. 1995 -1998 he worked as the head of the laboratory of products of vermiculturization at the Ukrainian NDC “Biohumus”. He was the head of the topic “Influence of biohumus on fertility indices of eroded soils of Prykarpattya”. Since 1998 – Chief Engineer of the Taras Shevchenko Seaside Park. 2002-2005 studying at the post-graduate course of Vasyl Stefanyk Precarpathian National University, specializing in “General Agriculture” (stationary form of study).

Since 2010, he has been a senior lecturer at the Department of Agrochemistry and Soil Science of the Precarpathian National University named after Vasyl Stefanyk, and since 2011 – as a lecturer of the department, and on December 15, 2015 he has been awarded the title of associate professor. 2006-2010 researcher of the Institute of Agro-Industrial Production, Executive Officer of NTP “Agriculture”. Task 02.01.01-079 “Explore the agroecological efficiency of the functioning of agrobiocenoses on eroded sloping lands of Western Precarpathians”.

In 2010 he defended his Ph.D. thesis on the topic: “Influence of bean-cereal grass mixtures on fertility and anti-erosion resistance of turf-podzolic eroded soil of Western Precarpathians”. As a result of research published more than 30 scientific works. Has developed a series of courses of lectures and guidelines for the implementation of course papers, field field practice training and practical classes on relevant courses in academic disciplines. He takes an active part in scientific and organizational-educational work of the department.

Freely owns a computer when working with standard programs (Word, Excel, E-mail, Photoshop, etc.). Additionally he has mastered specialized computer programs of GIS and databases. In 2015 he was trained at Kharkiv National University. VV Dokukhayev at the Department of Soil Science of the Faculty of Agrochemistry and Soil Science. From September 1, 2018 – holds the post of head of the departments of agrochemistry and soil science.